A charter member of the just-announced (to excitement so deafening it’s inaudible) MCOTD Hall of Fame, he’s being celebrated tonight at a concert, in Chicago’s Millenium Park, featuring musicians who came up under him, including saxophonists Steve Coleman and Eric Alexander.

No tenor player moves me more.

Being a local legend can be a mixed bag. Consider Von Freeman, the 72-year-old tenor saxophonist who reigns as Chicago’s preeminent local jazz legend. In the 40s, he performed with bop genius Charlie Parker. In the 60s, Miles Davis tried to hire him as a replacement for John Coltrane. In the 80s, he and his son Chico, a formidable saxophonist himself, shared an album with the first family of jazz: trumpeter Wynton Marsalis, his saxophonist brother Branford, and his pianist father Ellis (Fathers and Sons, Columbia). And in the 90s, he’s performed at New York’s most prestigious concert halls–Lincoln Center and Carnegie Hall.

But legendary status can have drawbacks. It’s opened a lot of doors for Freeman, making him a familiar figure at a variety of local clubs (including the Bop Shop, the Green Mill, Pops for Champagne, and Andy’s). But appearing so often at so many places can make a performer seem as unremarkable as a crooked alderman. And the tag “legendary,” which smacks of the sort of hushed reverence usually reserved for the dead, can make a performer seem less a vital artist–one who continues to take chances–than a bloodless icon.

But Freeman is neither unremarkable nor bloodless. Hearing him live is like taking a tour of a fun house: you never know what you’ll find behind the next door.

Upon entering, the first thing you notice is that the floor seems tilted–the result of Freeman’s distinctively oblique intonation. His sour off-center tone–which occasionally prompts charges that he plays out of tune–invests the best of his performances with a hard-edged emotional intensity. When he played Charlie Parker’s “Confirmation” on a recent weekend at the Jazz Showcase, where he led a fine quintet (Brad Goode on trumpet; Joan Hickey on piano; Mendai on bass; Robert Shy on drums one night and Michael Raynor on drums the other), he bristled with energy but also sounded wounded. And when he played the ballad “Lover Man,” he conjured up a world that was unremittingly bleak.

Freeman’s improvisations take you quickly from one room to the next. Some of them, like the meowing slurs during an unaccompanied solo on the ballad “Body and Soul,” are breathtakingly strange. Others, like the wild chorus at the top of his range on Duke Ellington’s “Caravan,” offer hair-raising adventure.

Not all of his ideas are equally striking. But jazz improvisation on the order of Freeman’s is necessarily a hit-or-miss affair. As Somerset Maugham put it, only the mediocre are always at their best.

Throughout the recent performance Freeman played the role of genial host. One moment he was encouraging the bassist: “Hit it, Mendai!” The next he was indulging in Von-speak, adding the ending “-ski” to proper nouns, turning himself into “Vonski” and the Duke Ellington piece into “Caravanski.” And in another he was explaining, in a tone half mocking and half serious, the unpredictable nature of jazz: “Sometimes this horn plays and sometimes it doesn’t. I have no control over it.”

At their best, Freeman’s performances dazzle in ways all too rarely encountered in jazz these days. While the well-mannered music of many of today’s most acclaimed performers (Wynton Marsalis, Marcus Roberts) may have its appeal, it generally lacks those undomesticated virtues that Freeman’s music celebrates: daring, originality, and unpredictability. Like the man himself, Freeman’s musical values are a product of this city. He began developing them while attending DuSable High School, where–like many other Chicago-bred jazz giants, including fellow tenor saxophonists Gene Ammons, Johnny Griffin, and John Gilmore–he studied under the fabled music teacher Captain Walter Dyett. As Freeman once explained in a New York Times interview, Dyett stressed originality, preaching a message both simple and elusive: “Try and find yourself.” Even when performing classic material (Ellington, Parker, Monk), Freeman’s music sounds brand-new. The difference between him and many younger musicians who have achieved greater renown is like that between a fun house and a museum.

. . . one of the most original and creative tenormen of the 1950s and, in light of other work I’ve heard by him, a great tenor player by any standards.

An exceptional artist, he belongs in jazz’s pantheon.

A while back, I said that if I had to name my favorite alto player, there would be days where I’d say Art Pepper.

Some days this’d be the guy.

Like Pepper, he has a sound that’s immediately identifiable. It’s a sound that, like Pepper’s, holds both joy and heartbreak. And like Pepper, he’s hard—no, impossible—to pigeonhole. Swing, bebop, free: the label that’s capacious enough to contain him hasn’t been invented.

Our music is a Secret Order.

The other night, during a performance and interview at the University of Chicago, he seemed, at times, a bit frail. He’s nearing 90 and was recently in the hospital. But what I said a while back still holds true: no tenor player moves me more.

The University of Chicago recently awarded Von the Rosenberger Medal, which “was established in 1917 . . . [and recognizes] achievement through research, in authorship, in invention, for discovery, for unusual public service, or for anything deemed of great benefit to humanity.” Past recipients include Toni Morrison, Pierre Boulez, and Frederick Wiseman. 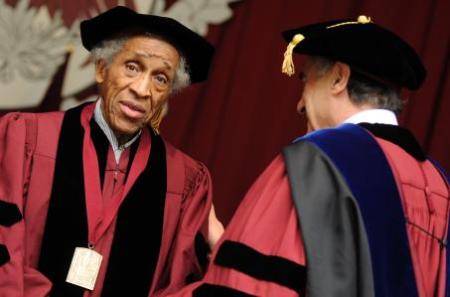 It takes years to explain those vibrational things in verbal language. And it still might not work. One time I asked Von Freeman about his voice-leading in harmony, he’s the master of that shit. I asked him, “How did you learn that shit? You’re so fluent at it.” And he said, “Well, you know, I sat down one day and I said, let me look at this thing.” He said, “I began with one tone. I studied one tone. And I studied all that I could study about one tone.” When these old guys talk, you don’t ask too many questions. You pretty much just listen to what they say. And so, I didn’t know what he meant, but I just listened. And he said, “I worked on that for a long time, you know, for months. Just seeing what could be done with one tone. When I felt pretty good about that, I moved on to two tones. That was a bit harder. I worked a lot longer, but I worked and saw all that I could do with two tones. Then I moved to three tones, and so on. After I went on for a while I realized that you can pretty much do everything that you need to do with two tones.” That’s what he told me. I spent years thinking about this shit. Years. I’m still thinking about it, you know. I feel like I have a better handle on knowing what he meant now than then, although it is not a simple thing to explain. And when I tell the story to somebody playing in my group or something, and they ask me, “What did he mean?” it takes me literally years to explain what I think he means. And I’m sure I only have part of what he means. What it means to me. Some things, you have to explain them with a million examples over a period of time. The meaning dawns on a person and when they have to explain it it’s funny. We live in this McDonald’s type society where everybody thinks everything is just quick. It’s not like that. You have to actually build the understanding, slowly over time. So this thing that Von Freeman explained to me, it sounds like a very simple thing, but it really doesn’t make any sense at all without the experience. It’s maybe fifteen years ago that he told me, and I found it to be absolutely true. I could never explain it in one day, or in a lecture over an hour.

No other musician, in any genre, has meant so much to me in so many ways for so many years. I first heard Von in the mid-70s, when I was in my twenties (and working for Alligator Records) and he was in his fifties. The setting, coincidentally, was the University of Chicago; he opened for Cecil Taylor. I got to know him and booked a few shows for him. In 1977, when I got married, he and pianist John Young played at our wedding ceremony. Later, when I was reviewing live jazz, I wrote a piece about him for the Chicago Reader. Over the last three decades, I’ve listened, avidly, to his growing catalog of albums and seen him live more times than I could count. He is now an old man. And I am getting there.

So often, it seems, when arts awards are announced, my initial reaction is: “Huh?” Not this time. The National Endowment of the Arts just announced their 2012 Jazz Masters Awards, which recognize, with Lifetime Honors, “living musicians for career-long achievement.” And the winners are Jack DeJohnette, Jimmy Owens, Charlie Haden, Sheila Jordan, and Von Freeman.