According to Miles Davis, the history of jazz can be summarized in four words: Louis Armstrong, Charlie Parker.

Don’t play the saxophone. Let it play you.

Assuming Irene doesn’t crash the party, the folks at WKCR-FM (broadcasting from Columbia University)* will be playing Lester Young all day today and into tomorrow, when, at some point, they’ll make the transition to Charlie Parker, whose birthday is Monday. As I wrote last year: “Something happens—something delicious—when you surrender your ears and yourself to someone’s music for such a sustained period of time. Little by little, that musician moves in, taking up residence in your brain. Their distinctive voice becomes, for a time, inseparable from everything else you’re hearing and seeing and thinking and feeling.”

*Later note (2:45 p.m. [CST]): When I just checked, their website seemed to be down; you can also get them via iTunes (radio/college).

Tony Bennett on Amy Winehouse (weeks before her death)

Does anyone have more fun than drummers?

You know the drum was the first instrument besides the human voice.

If God wanted us only to hear what we’ve heard before, He wouldn’t have made radio.

From the streets of New Orleans to the parks of New York.

The Miller Theater made a mighty contribution to the daylong festival Make Music New York on Tuesday in the form of an expansive 80-minute performance of John Luther Adams’s “Inuksuit” (2009). Mr. Adams, who lives in Alaska, conceived this elastic percussion work as an outdoor piece for 9 to 99 players, and Melissa Smey, the theater’s director, went for the maximum, commandeering Morningside Park and inviting the percussion virtuoso Doug Perkins to lead a mega-ensemble that included So Percussion, the Percussion Group Cincinnati, the Proper Glue Duo, Mantra Percussion and students from music schools around the country.

Listeners walking through the park before 5 p.m. found small arrays of unattended drums, cymbals, xylophones and other instruments stationed along the park’s stairs and walkways, and conch shells, paper cones and rubber tubes scattered around the lawn where the performance was to begin. At 5, the 99 percussionists filed into the field, retrieved the smaller instruments and started the performance with gentle windlike sounds. They added graceful, eerie tones and harmonies by swinging the rubber tubes at various velocities; and they used sandpaper blocks and frame drums filled with bottle caps to create texture.

Gradually, the players dispersed through the park, making their way to the drum arrays. Your experience of the piece depended on where you were in the park, and most people walked around. (At one point I flipped a coin to choose which path to take.) But wherever you were, bursts of sound — loud, quiet, hard, soft — surrounded you.

There were sounds Mr. Adams may not have counted on. Birds and aircraft made their own contributions, as did camera shutters: at any moment, just about every player was being photographed by two or more listeners. And near the end of the piece, when the sounds were mostly the tactile ringing of xylophones and triangles, an ice cream truck added its cheerful melody to the mix (presumably not by design). But through the entire performance, I did not hear a single cellphone ring.

An odd planet, and those on it are odd, too.
They’re subject to time, but they won’t admit it.
They have their own ways of expressing protest.
They make up little pictures, like for instance this:

At first glance, nothing special.
What you see is water.
And one of its banks.
And a little boat sailing strenuously upstream.
And a bridge over the water, and people on the bridge.
It appears that the people are picking up their pace
because of the rain just beginning to lash down
from a dark cloud.

The thing is, nothing else happens.
The cloud doesn’t change its color or its shape.
The rain doesn’t increase or subside.
The boat sails on without moving.
The people on the bridge are running now
exactly where they ran before.

It’s difficult at this point to keep from commenting.
This picture is by no means innocent.
Time has been stopped here.
Its laws are no longer consulted.
It has been relieved of its influence over the course of events.
It has been ignored and insulted.

On account of a rebel,
one Hiroshige Utagawa
(a being who, by the way,
died long ago and in due course),
time has tripped and fallen down.

It might well be simply a trifling prank,
an antic on the scale of just a couple of galaxies,
let us, however, just in case,
add one final comment for the record:

For generations, it’s been considered good form here
to think highly of this picture,
to be entranced and moved.

There are those for whom even this is not enough.
They go so far as to hear the rain’s spatter,
to feel the cold drops on their necks and backs,
they look at the bridge and the people on it
as if they saw themselves there,
running the same never-to-be-finished race
through the same endless, ever-to-be-covered distance,
and they have the nerve to believe
that this is really so. 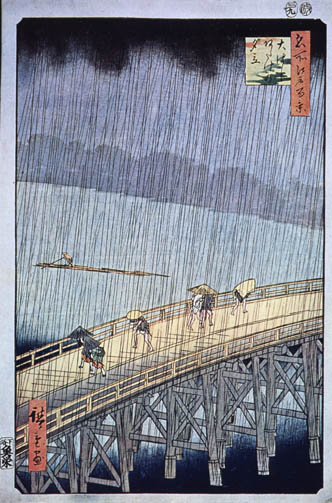 Need to chase away those Monday morning blues?

You’ve come to the right place.